﻿HIGH JUMP IS ABOUT JUMP TO PASS THE POLE BAR﻿.

﻿INTRODUCTION﻿ :
High Jump and Pole Vault are known as the Vertical Jumps. Many of the same rules apply to both so they are often combined as an area of officiating expertise. A primary duty of High Jump and Pole Vault officials before an event is to ensure the proper  set up and safety of the facilities to be used for the competition. They must be attentive  to watch for approved and properly deployed equipment, time constraints, consistent measurement and a fair competitive opportunity for every competitor. That means that each competitor competes with an equal advantage in relation to the equipment used and the competition conditions.  Most importantly, each field event official must give their full attention to maintaining safety at the competition site.


HISTORY :
The first recorded high jump event took place in Scotland in the 19th century. Early jumpers used either an elaborate straight-on approach or a scissor technique. In the latter, the bar was approached diagonally, and the jumper threw first the inside leg and then the other over the bar in a scissoring motion. Around the turn of the 20th century, techniques began to modernise, starting with the Irish-American Micheal Sweeeney’s Eastern cut-off. By taking off like the scissors, but extending his back and flattening out over the bar, Sweeney achieved a more economic clearance and raised the world record to 1.97 m (6 ft 51⁄2 in) in 1895.

Another American, George Horine developed an even more efficient technique, the Western Roll. In this style, the bar again is approached on a diagonal, but the inner leg is used for the take-off, while the outer leg is thrust up to lead the body sideways over the bar. Horine increased  the world standard to 2.01 m (6 ft 7 in) in 1912. His technique was predominant through the Berlin Olympic of 1936, in which the event was won by Cornelius Johnson at 2.03 m (6 ft 73⁄4 in).

American and Soviet jumpers held the playing field for the next four decades, and they pioneered the evolution of the straddle technique. Straddle jumpers took off as in the Western roll, but rotated their (belly-down) torso around the bar, obtaining the most economical clearance up to that time. Straddle-jumper Charles Dumas  he world mark to 2.23 m (7 ft 33⁄4 in) in 1960. Valeriy Brumel took over the event for the next four years. The

elegant Soviet jumper radically sped up his approach run, took the record up to 2.28 m (7 ft 53⁄4 in), and won the Olympic gold medal in 1964, before a motorcycle accident ended his career.

American coaches, including two-time NCAA champion Frank Costello of the Univesity of Maryand, flocked to Russia to learn from Brumel and his coaches. However, it would be a solitary innovator at Oregon State University, Dick Fosbury, who would bring the high jump into the next century. Taking advantage of the raised, softer landing areas by then in use, Fosbury added a new twist to the outmoded Eastern Cut-off. He directed himself over the bar head and shoulders first, sliding over on his back and landing in a fashion which would likely have broken his neck in the old, sawdust landing pits. After he used this Fosbury flop  to win the 1968 Olympic gold medal, the technique began to spread around the world, and soon floppers were dominating international high jump competitions. The last straddler to set a world record was Vladimir Yashchenko, who cleared 2.33 m (7 ft 71⁄2 in) in 1977 and then 2.35 m (7 ft 81⁄2 in) indoors in 1978


RULES
Jumpers must take off on one foot.

A jump is considered a failure if the bar is dislodged by the action of the jumper whilst jumping or the jumper touches the ground or breaks the plane of the near edge of the bar before clearance . The technique one uses for the jump must be almost flawless in order to have a chance of clearing a high bar.

Competitors may begin jumping at any height announced by the chief judge, or may pass, at their own discretion. Three consecutive missed jumps, at any height or combination of heights, will eliminate the jumper from competition.

The victory goes to the jumper who clears the greatest height during the final. If two or more jumpers tie for first place, the tie-breakers are: 1) The fewest misses at the height at which the tie occurred; and 2) The fewest misses throughout the competition.

If the event remains tied, the jumpers have a jump-off, beginning at the next greater height. Each jumper has one attempt. The bar is then alternately lowered and raised until only one jumper succeeds at a given height. 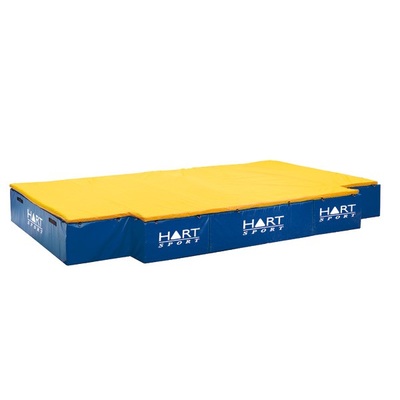 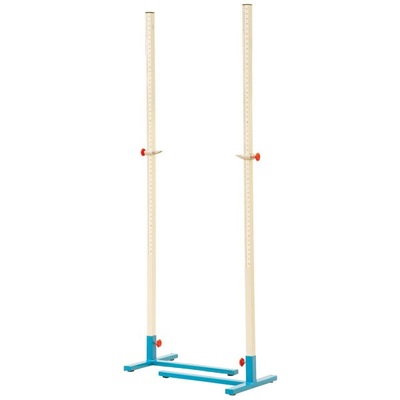 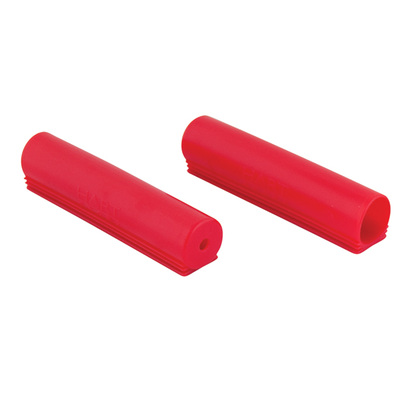 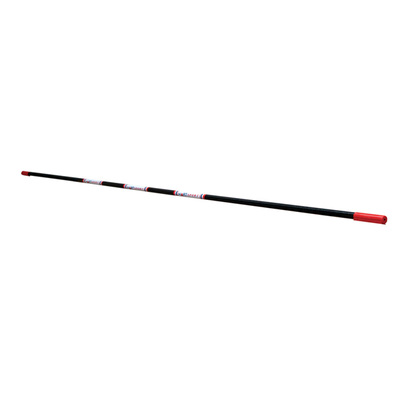 HIGH JUMP TECHNIQUE
There are three basic parts to a high jump – approach, takeoff and clearance. Each part will likely be taught separately at first, using a variety of high jump drill. When teaching the approach, coaches will likely focus on maintaining the correct running speeds at different parts of the approach, on taking a proper angle to the bar and on hitting the correct takeoff point. Intuitively, young jumpers may want to take off as close to the bar as possible. This, however, will cause the jumpers to leap almost straight up – at too narrow of an angle – and they’ll likely knock the bar off on the way down, even if they achieve sufficient height. Potential jumpers will also determine a takeoff leg – the strongest leg will be on the inside during the jump, making the opposite the takeoff leg. Takeoff and clearance drills may begin with the backflips mentioned previously. The young jumpers will then move on to clearance technique, perhaps learning the old-fashioned scissors kick first, to get them used to flying over the bar, then later advancing to the modern “fosbury-flop” technique. 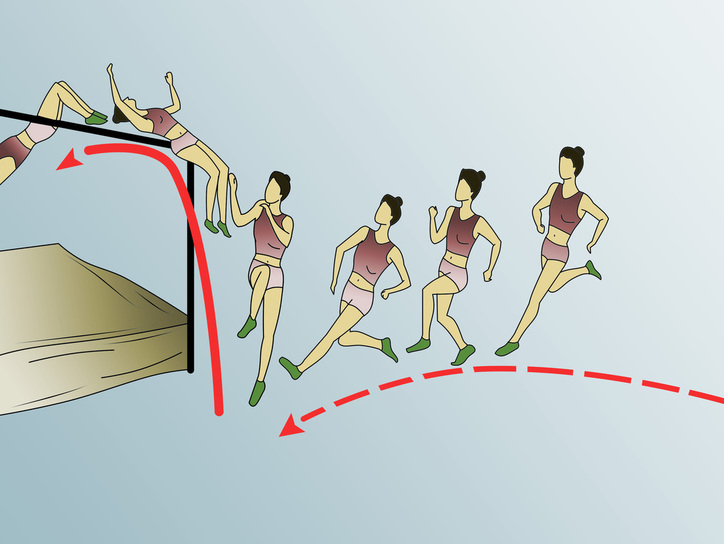 FLYING OVER THE BAR
BIOMECHANIC IN TRIPLE JUMP

One of the most significant innovations in athletics was the introduction of the "Fosbury Flop" by Dick Fosbury in 1968. He pioneered a radical new technique in high jumping. Prior to 1968, high jumpers traditionally cleared the bar by running, jumping and while remaining head up throwing over one leg and then another (straddle style). Fosbury twisted his body so that he went over head first with his back next to the bar.

Progression of bar clearance effectiveness If a high jumper remains in a straight vertical position after taking off from the ground, the height of the bar that the feet can clear will be far below the peak height of the c.m. By lifting the legs, the trunk and head get lower, and the c.m. stays at the same peak height as  before.  But the athlete can clear a higher bar.

The next technique in the evolution of high jumping was the “scissors”, in which the legs are
lifted over the bar in alternation one after the other. The advantage of the scissors technique
is that parts of both legs are below the level of the bar at the peak of the jump.  This increases
the height of the pelvis, and therefore the bar height that can be cleared.

The scissors was followed by the “eastern cut-off” technique (sometimes called the Lewden scissors in Europe). In this technique the athlete rotates the trunk into a horizontal position at the peak of the jump. This lowers the trunk, and therefore lifts the pelvis higher than in the simple scissors technique. The result is a higher bar clearance. A disadvantage of the Eastern cut-off is that it requires tremendous flexibility.

The eastern cut-off was succeeded by the “western roll” technique. In this technique the athlete cleared the bar on his/her side, with the takeoff leg tucked under the rest of the body. This technique probably did not improve much the effectiveness of the bar clearance in relation to the eastern cut-off. However, it also did not require very much flexibilty.Thus, the contribution of the western roll was to provide a reasonably effective bar clearance for a larger number of high jumpers.

The western roll was followed by the “straddle” technique. In this technique the athlete cleared the bar face-down, with the body stretched along the bar. The straddle allowed parts of the legs to be lower than the bar at the peak of the jump. This allowed the pelvis to rise to a greater height in relation to the position of the c.m., and therefore improved the effectiveness of the bar clearance.

A new variant of the straddle appeared around 1960. It was called the “dive straddle”. In this technique, at the peak of the jump the athlete’s trunk was set at an oblique angle with respect to the bar. This allowed the athlete to drop the head and upper trunk below the level of the bar at the peak of the jump. This raised the hips and the rest of the body, and therefore allowed the athlete to clear a higher height than with the older(“parallel”) straddle. Dyachkov adopted this bar clearance technique for his jumpers.

A completely new technique appeared in the mid-1960’s. It was invented independently by several different jumpers who took advantage of the increased safety provided by foam-rubber landing mats. In 1968, DickFosbury won the American University (NCAA) Indoor and OutdoorChampionships using this technique.

It can be concluded that high jumpers with different body types, physical characteristics and performance techniques have good possibilities to complete successfully in the highest level. The different variations of the flop technique enable the utilization of the best physical capacity of the each individual jumper. Therefore i seems that there is not only one ideal technique to achieve good results.